I recently ran into an issue with a client’s system where they were unable to build an web manifest by project differences. During the manifest being created, when attempting to add the quick forms, an error was thrown which contained:

After digging in what I determined was in their version of Infor CRM 8.3.x was adding a bunch of null characters to the end of the quickform XML files when they were saved. Null characters obviously do not show and they have no impact on using the quick forms within the Application Architect. However, when building the web manifest, it actually validates that the XML files being added are valid XML files. Since null characters are not valid XML characters it fails with this error.

What I ended up doing to correct this was:

Exported the VFS to a file system VFS.
Then downloaded and installed Notepad ++
After installation I opened Notepad ++ and chose the drop down menu Search/Find in Files.
In the Find In Files dialog I set the following:

I then clicked Replace in Files 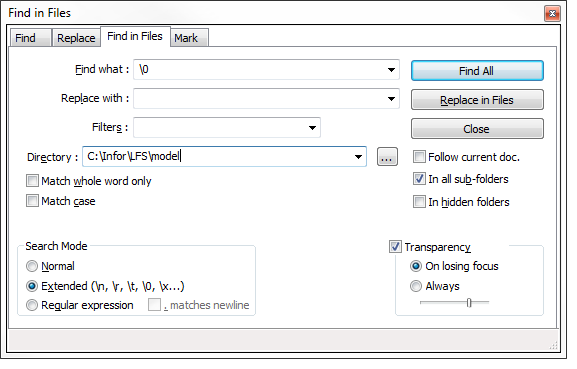 After doing this you could either build you project manifest off the file system based VFS, or import the file based VFS into the database and then run the project differences manifest from there.