Creatio Package Types and Objects Exposed via the OData API

Why does it matter whether you’re using the OData3 API or the OData4 API? It matters because the type of package the object you’re reading is in makes a difference whether you can access the object in one or the other. Creatio has different package types, Simple packages (what you’ve had all along), Project Package (which is identical to a simple package except it has it’s own C# csproj and can have a Files folder where additional file sources can be used, typically created using clio), and an Assembly Package. Assembly packages were introduced in Creatio 7.18.3. What makes an Assembly Package different than a Project Package is that the assembly package gets compiled into it’s own DLL, so when you publish something in an assembly package, only that package gets compiled instead of the entire configuration.

You can tell if your package is an assembly package if the package has the “compile into a separate assembly” option checked: 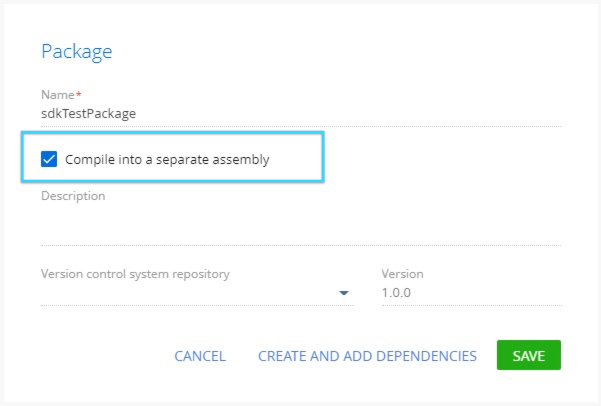 Now, back to how this ties in with accessing objects via the Creatio OData API.

If the object you’re attempting to read via OData exists in a package that is an assembly package, you cannot access the object via the OData 3 API. You can only use the OData 4 API.

From the documentation on assembly packages:

Note, that in current versions of Creatio, assembly packages are the default, meaning the “compile into a separate assembly” option defaults to checked (you can uncheck if needed).